Hirohashi Kanehide, the son of Morimitsu and father of Kunimitsu, wrote this letter praising the acts of Michikiyo’s grandfather in rescuing the clothes in 1470. Kanehide is incorrect, as the previous document makes clear that Michikiyo’s great-grandfather accomplished these actions. As a result of this great merit, Michikiyo was promoted to the ranks of the high nobility, an honor unprecedented for his house. This letter was dispatched first to the Takakura, who remained lords of the Awazu even though Awazu Michikiyo had ascended the ranks of nobility. This letter too was closed with a kirifu and sealed with a sumihiki. 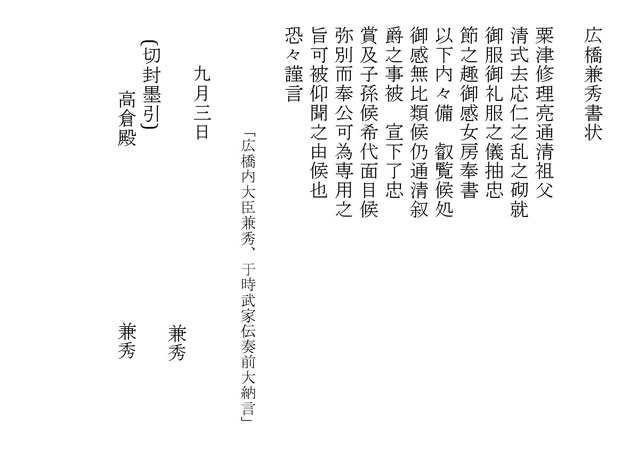 The emperor viewed a court lady’s communiqué praising the outstanding service of Awazu shuri no suke Michikiyo’s grandfather (sic) Kiyonori who rescued garments and ceremonial robes during the past Ōnin War. The emperor, moved beyond measure, issued an edict promoting Michikiyo to the ranks of the nobility. “It is a great honor, and most rare, for rewards to accrue to one’s descendants like this. Devote yourself to further service. So this shall be heard.” Respectfully

Hirohashi Kanehide The Palace Grand Minister. At the time, Transmitter of Messages for the Ashikaga (Buke tensō) and Former Grand Councilor
Kanehide