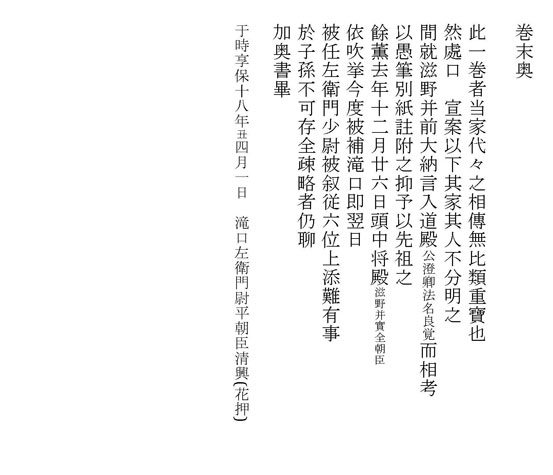 This scroll, transmitted through the generations of this house, is an incomparable treasure. Nevertheless, as it was unclear as to whom of what house received these records of proclamations (kuzen an) and other documents, so Shigeno and the Lay Priest Former Grand Minister Lord Kinzumi Holy Name Ryōkaku explained these records and I clumsily wrote notations on separate pieces of paper. I have received the lingering honor of my ancestors, for on this past twenty-sixth day of the twelfth month, the Secretary Captain Lords (tō no chūjō) Shigeno and Saneyasu ason recommended me to be appointed as a palace guard (takiguchi) and on the next day I was appointed as the Lesser Lieutenant of the Left Palace Guard (saemon shōjō) of the Sixth Rank Upper. My descendants should not be careless regarding these auspicious things. Thus I have added this postscript as such.