This document was issued by Kamakura to its warriors, or gokenin, ordering them to quell a rebellion late in 1332. Kamakura mobilized warriors according to their house, and in this case Migita Sukeie was ordered to lead his relatives and dependent followers, or retainers, into battle against Prince Moriyoshi and Kusunoki Masashige, who were leading a rebellion against Kamakura. Hōjō Moritoki was the shikken, or chief administrator of Kamakura, while his co-signer (or rensho) was Hōjō Shigetoki. The calligraphy is excellent, and surviving documents reveal that the same scribe penned numerous documents to local warriors. Both Moritoki and Shigetoki perished in the fifth month of 1333 when their regime collapsed. 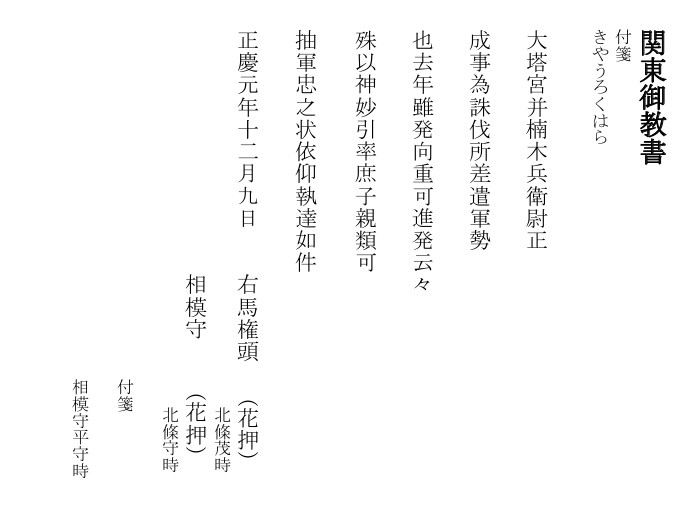 We are mobilizing military forces in order to chastise Prince Moriyoshi (Ōtōnomiya) and Kusunoki saemon no jō Masashige. Last year we dispatched forces, but nevertheless, we now need to depart again.

You shall display exemplary service, and lead forth your collaterals and relatives. It is commanded thus.

Elements not appearing on the original document.