Ashikaga Yoshiteru wrote this document, called a gonaisho, to Uesugi Kenshin, an important ally, who in 1559 encamped at Sakamoto, to the east of Kyoto. Yoshiteru inquires about Kenshin’s health, and then states that a messenger, Ōdachi Saemon no suke (Teruuji) would provide Kenshin with information. This letter was sealed by what is called a kirifu. The right side of the paper was cut and used to tie the document. It was then covered in a second sheet of paper, called a kasanegami, which was folded and sealed with a line of ink. Finally another envelope, called a fushi, was used to enclose the document. This letter from Yoshiteru could only be opened by Kenshin, and the double seals ensured that no one else could see the contents of this record. The Uesugi documents are preserved in their original format, and it is rare to see such records in their original form. 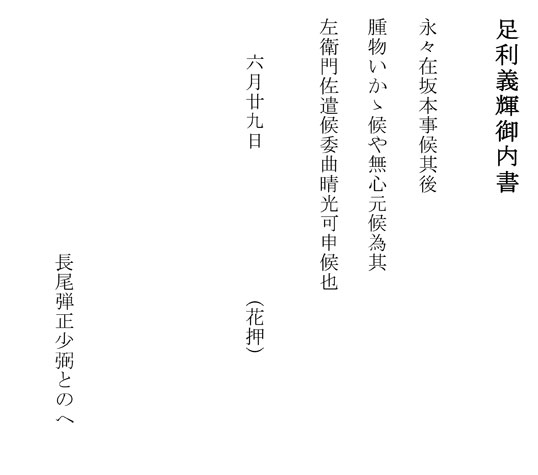 You have been at Sakamoto for quite some time.In the meantime, how has your swelling been?

I am not at ease, and thus have dispatched this .

Harumitsu shall speak to you in further detail.

This literally translates to “deputy of the Left gate guard”and was a government post appropriate for people of lower rank originated in the ritsuryō system; those with this office were primarily tasked as guards for the castle gates, watchmen for the palace grounds, and outriders for imperial visits
c.1559
While this title originated in the ritsuryō system as a government post meant to oversee law and order in the capital (a duty later handed to the imperial police force or kebiishi), by the sixteenth century this office was one devoid of actual power but still resonant in symbolic authority